Radio frequency identification (RFID) tags for the development of smart environments, more commonly termed “internet of things”, cell phones or laptops are examples of electronic devices that need high performance miniaturized electrochemical storage devices able to deliver energy from their environment. Integration of electrochemical capacitors with silicon-based electronics is a major challenge limiting energy storage on a chip. A couple of years ago, we proposed a way to prepare micro-supercapacitors from the chlorination of TiC ceramics (Science 2010) but it was not possible to make integrated micro supercapacitor cells on Si wafer from this approach. In this paper, we describe a wafer-scale process for manufacturing strongly adhering carbide-derived carbon films and interdigital micro-supercapacitors with embedded TiC current collectors, which is fully compatible with current microfabrication and silicon-based device technology. The process produces carbon elastomer with a unique combination of microporosity, electrochemical and mechanical properties. When TiC films were partially chlorinated and transformed into porous carbons (see figures below), Si / TiC / porous carbon electrodes could be prepared with high adherence properties. Capacitance of these films (410 F.cm-3 / 200 mF.cm-² in aqueous electrolyte and 170 F.cm-3 / 85 mF.cm-² in organic electrolyte) can challenge the best carbon supercapacitors reported so far. 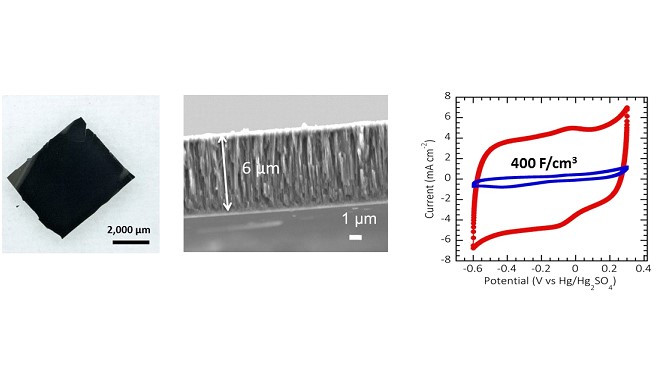 In situ NMR and electrochemical quartz crystal microbalance techniques reveal the structure of the electrical double layer in supercapacitors.

EQCM measurements were coupled to in-situ NMR experiments to directly quantify ion fluxes within working microporous carbon supercapacitor electrodes. Our results showed that charge storage mechanisms are different for positively and negatively polarized electrodes. At the negative electrode, the change of the ion population plotted versus the potential clearly shows that only counter ion adsorption is visible in a -1.5 V – 0V potential range, thus confirming previous results using different electrolyte (see paper 3. above). Anions are stabilized inside the electrode despite negative polarization. On the opposite, during positive polarizations within a 0 V – 1.5 V potential range, an ion exchange mechanism was evidenced where anions go inside the pores while cations leave the porous carbon electrode (see figure). EQCM measurement also conducted at constant potentials have confirmed these NMR results, and a partial ion desolvation has been measured for the cation during negative polarization. On positive side, the ion exchange mechanism well fitted the experimental plot meaning that acetonitrile molecules are not exchanged during the adsorption process ; they just re-organize inside the porous carbon structure. 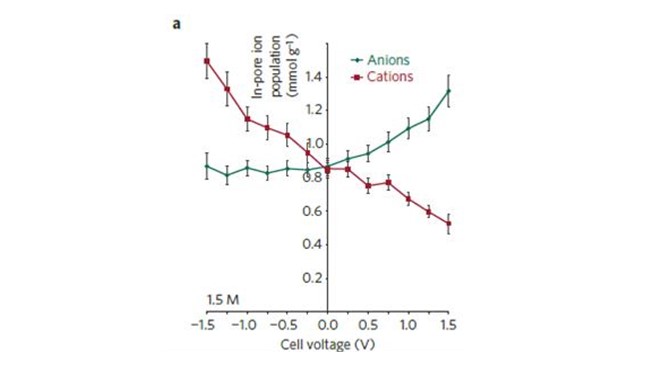 These results provide new molecular-level insight, with the methodology offering exciting possibilities for the study of pore/ion size, desolvation and other effects on charge storage in supercapacitors. It also highlights a lack of understanding of the charge storage mechanism. Understanding such mechanisms is of high importance since it would provide guidelines for preparing porous carbon with optimized structure for designing high energy density supercapacitors.

Electrochemical quartz crystal microbalance (EQCM) experiments were achieved to characterize ion adsorption in porous carbide-derived carbons under polarization, in 2M EMI+,TFSI- in acetonitrile electrolyte. We experimentally measured solvation numbers for EMI+ cation, evidencing a partial desolvation when cations were adsorbed in confined carbon pores. The extent of desolvation was measured to increase when decreasing the carbon pore size. As a result, cations enter with 3.4 acetonitrile molecule in 1 nm pores while EMI+ cations are surrounded by about 8 solvent molecules in bulk electrolyte. EMI+ cations confined in 0.65 nm pore size carbon have only 1.2 solvent molecules. The results suggest that EMI+ owns higher mobility than TFSI- in these electrolytes. More importantly, they show two different charge storage mechanism depending on the electrode polarity. For negatively charged electrodes, the charge balancing in nanoporous carbon electrodes in achieved through counter-ion (cation) adsorption. For positive polarization, the smaller slope of the electrode weight change versus the charge in the electrode evidences an ion exchange mechanism, where anions enter the porous electrode while cations leave. 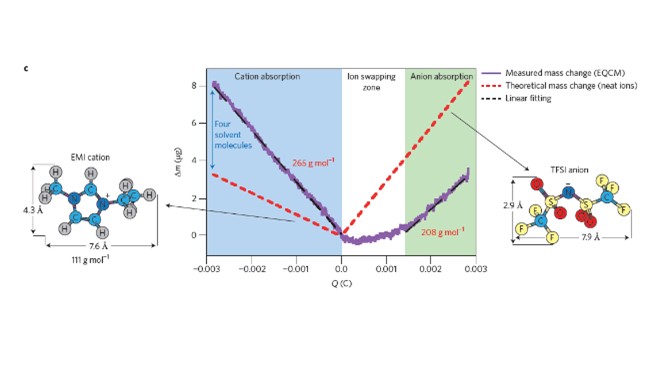 In this review article, we recalled the latest key fundamental discoveries obtained in the field of supercapacitors, such as the dramatic capacitance increase in carbon pores with a size less than 1 nm (Science 2006, see above) and the maximum capacitance when the ion size was in the same range of the pore size (JACS 2008, see Figure). There two contributions have led to a paradigm shift in the way the charge of the electrochemical double layer, was achieved in confined pores ; this helped to overcome a barrier that has been hampering the progress in the field for several decades. Beyond that, and even more important, we proposed a view of what could be future research directions in the field, such as the need for combining a theoretical approach to experimental one, the development of ionic liquid eutectic mixture for reaching high voltage supercapacitors or the decoration of high surface, highly accessible nanostructured materials together with pseudocapacitive materials operating with fast, surface limited redox reactions. The improvement of supercapacitor performance can also rest on the design of new materials that combine double-layer capacitance and pseudo-capacitance, and by developing hybrid devices. Nano-architecturing of electrodes using for instance carbon nanotubes for flexible, wearable and printable devices with shorter response time led to further improvements in power delivery. 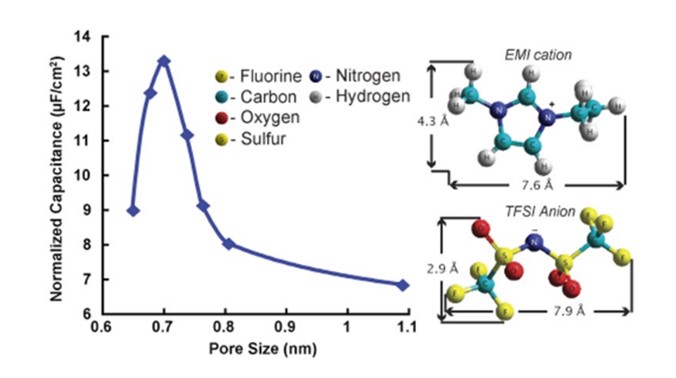 Electrochemical Double layer Capacitors, also called supercapacitors, store the charge by adsorption of ions from an electrolyte into high surface area porous carbons (1,000 to 2,000 m² per g). These porous carbons are obtained from activation process, which consists in controlled oxidation of carbon. There was a traditional belief stating that micropores (pores less than 1 nm that is less than the size of the solvated ions) were useless for capacitive storage since the ions could not access these confined pores. However, such a traditional view was not supported by experimental results since it was very difficult to prepare a series of microporous carbons with controlled pore size and narrow pore size distribution in the 0.6 – 1.5 nm range. In collaboration with Prof Gogotsi (Drexel University, Philadelphia), we prepared a series of carbon samples called Carbide-Derived carbons (CDCs) using an alternative method. CDCs are porous carbons obtained by extraction of metals from carbides (TiC, SiC and other) by etching in halogens at temperatures from 400°C to 1000°C :MC + nCl2 —> MCl2 + C (1) where M is a metal and C the CDCIn this reaction, Ti is leached out from TiC and carbon atoms self-organize into an amorphous or disordered graphitic structure with the pore size that can be fine-tuned by controlling the chlorination temperature and other process parameters. Accordingly, a narrow uni-modal pore size distribution can be achieved in the 0.6 – 1.1 nm range and the mean pore size can be controlled with sub-Angstrom accuracy. These materials were used to understand the charge storage in micropores using 1M solution of NEt4BF4 in acetonitrile electrolyte. The normalized capacitance (F/m²) decreased with decreasing pore size until a critical value of 1 nm was reached (see Figure below), and then dramatically increased when the pore size approached the ion size. Since CDC samples were exclusively microporous, the capacitance increase for sub-nanometer pores clearly shows the role of micropores. Moreover, the gravimetric and volumetric capacitances achieved by CDC were, respectively, 50% and 80% higher compared to conventional activated carbons. It was proposed at that time that ions could access the micropores due to the partial or complete removal of their solvation shell. 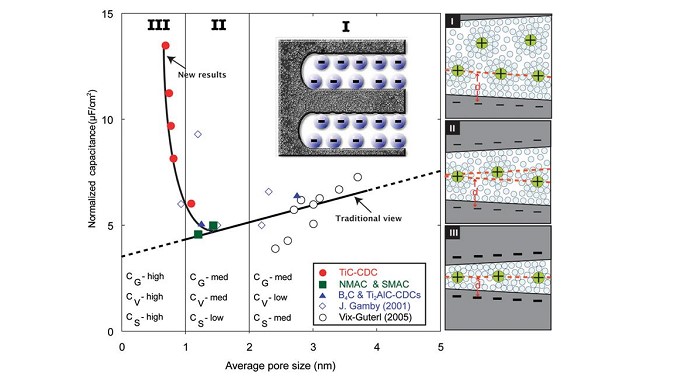